The world and the church have a picture of St Nicholas, it is a safe picture, he is a kindly man, a Bishop with a big white beard, who gives presents to children and does lots of lovely things. That’s all well and good, and there is much that can be said about the gentleness and generosity of the man, and how that points us to Christ. But recently I have found myself pondering another aspect of this great Saint. At the first ecumenical Council of Nicaea in ad325, Nicholas, Bishop of Myra slaps Arius for denying the coeternal and consubstantial nature of the second person of the Trinity, Our Lord and Saviour Jesus Christ. Nicholas got angry and his fellow bishops and the Emperor Constantine didn’t exactly approve of the pugilist prelate.

If it were to happen today I could imagine the media outcry, Twitter would be flooded with #bishopgate and #TeamArius posts. No doubt some eminent theologian would state that it’s perfectly alright to say that ‘there was a time when he was not’ and that Adoptionist or Subordinationist positions are all equally valid points of view and that one Christology is as good as another, that this was Arius’ truth and it needs to be affirmed, that we need to feel his pain and resist the patriarchal oppression of an authority figure like Nicholas and so on.

Nicholas slaps Arius because orthodoxy really matters, what we believe about God and the Church really matters. The Word of God, who was with his Father in eternity, before all time, and matter, and space, becomes incarnate in the womb of the virgin, for the salvation and redemption of all humanity: true God and true man, consubstantial and coeternal. It may be easier to deny this, it may make more sense, or be consistent with a philosophical position, but it will not do. As St Ambrose put it: non in dialectica complacuit Deo salvum facere populum suum (it was not the will of God to save his people through dialectic) [De Fide 1:5, §42]. The Incarnation is a scandal and a mystery which defies human understanding and intellect, reason and philosophy it is something to be experienced, to be tasted and felt.
This is what we await in Advent, the coming of Our Lord as a baby in Bethlehem and his second coming as Our Judge, bearing in his glorious body the wounds of love, borne for us and our salvation. So let us live lives which proclaim his saving love and truth to a world hungry for meaning and love and thereby honour God the Father, God the Son, and God the Holy Spirit, the consubstantial and coeternal Trinity, to whom be ascribed as is most right and just all might, majesty, glory, dominion and power, now and forever. 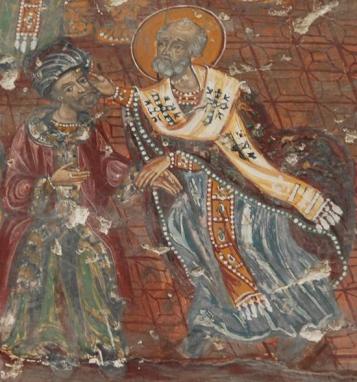