John the Baptist looked at Jesus as he walked by and said, ‘Behold the Lamb of God!’ Lambs were a central part of the Jewish festival of Passover. In order to avert the tenth plague in Egypt, the people of Israel were instructed to take a young lamb without any blemish and slaughter it. They were then to anoint the doorposts of their house with it, so that their firstborn would be saved, not killed by the Angel of Death. The lamb was to be roasted over the fire and eaten standing up whilst dressed for a journey. This festival of Passover is the high point of the Jewish religious calendar, and marks the start of their journey from slavery in Egypt to the Promised Land of Israel. It is also the time of Jesus’ Passion, Death, and Resurrection.

In order to meet the needs the large number of people celebrating the passover festival in the early 1st century AD, there needed to be a lot of shepherds raising flocks of animals for slaughter. In the Christmas story we see that the first visitors to the Holy Family in Bethlehem were shepherds. As Bethlehem is only six miles from Jerusalem, these shepherds were raising the lambs that would be consumed at Passover in nearby Jerusalem in their thousands. Jesus, like these lambs was also without blemish and would be killed at Passover. So from the very moment of Christ’s birth, His Death is foreshadowed.

Traditionally Jesus’ death is understood to have happened at the ninth hour, 3pm, which is the same time that the passover lambs began to be slaughtered in the Temple in Jerusalem for the feast of Passover. This is not mere coincidence, but rather signal proof that Christ’s death is sacrificial, and represents the new Passover, and the freedom of the people of God. In this morning’s Gospel Jesus’s cousin, John the Baptist, greets Him, saying, ‘Behold the Lamb of God, who takes away the sins of the world’. John understands that Jesus is the passover Lamb.

The image of a lamb brings to mind a passage in the prophet Isaiah, where the Suffering Servant is compared to, ‘a lamb that is led to the slaughter, and like a sheep that before its shearers is dumb’ (Isa 53:7). This prophecy will be fulfilled in Holy Week on Good Friday. Here, at the start of John’s Gospel, just after the Baptism of Jesus in the Jordan, when John the Baptist saw the Spirit descend on Him, (before the first sign of turning water into wine at the marriage of Cana), John’s description of Jesus is a prophetic utterance which points forward to Jesus’ death on the Cross. So then, from the very start of Our lord’s life, as with the gift of myrrh at Bethlehem, the beginning points to the end: to Calvary (and beyond).

In Genesis, we read of Abraham’s sacrifice of Isaac, who is saved when at the last moment a ram appears in a thorn bush. Isaac carrying wood for the sacrificial fire, prefigures Christ carrying the wood of the Cross. The ram in the thorns foreshadows Christ, the Lamb of God, crowned with thorns. Mt Moriah, where these events take place, is the mountain on which Jerusalem was built, and whose highest point is Golgotha, which is where Our Lord was crucified. The old foretells the new, and is completed by it.Prophecy is fulfilled. In Christ, God is glorified, and of Him the prophet Isaiah says, ‘I will make you as a light for the nations, that my salvation may reach to the end of the earth’ (Isa 49:5 ESV).

In the Eucharist, just before we receive Communion I will repeat the words of John the Baptist, ‘Behold the Lamb of God…’ so that we may recognise Christ in our midst; we respond with the words of the Centurion, in Luke 7:6-7, ’Lord I am not worthy…’ It is this sense of unworthiness which keeps us both humble and reliant upon God to transform us. We hear John the Baptist’s words so that we may join in his confession that this is the Son of God. Christ is truly present in the Eucharist in a way which we cannot understand, which words and language cannot express, because that is how God is. As a result of the Word becoming flesh and dwelling amongst us, God incarnate makes himself known so that we might worship God, and that God might be at work in us. Unlike the sacrifices of Passover and the Day of Atonement which needed to be repeated annually, the Sacrifice of Christ on the Cross happens once, to deal with all sin, past, present, and future, to reconcile humanity to God and to each other. It is this reality which we celebrate today: we have been set free.

This is the Good News of the Kingdom. We are loved by God, who flings His arms wide on the Cross to embrace the world with love. A God who embraces the shame of a slave’s death, the most brutal demonstration of Roman power, the most degrading way to die, to show the world love. It isn’t what you’d expect, and that’s the point. God does not want to compel us to love Him or worship Him, but rather makes a relationship possible, so that we might come to know Him, and love Him. As we approach the altar, this is what we are to receive, the Body and Blood of Christ, the self same body and blood which were nailed to the Cross for our sins and the sins of the whole world. Our hands will hold and our lips will touch him who created the entire universe. How can we not fail to be shocked by the generosity of a God who gives himself to us in such a personal way, in a way that we do not deserve? Yet, we can never deserve such a gift, that is why God takes the initiative and gives himself to us, freely and gladly. Like the Father of the Prodigal Son, God rushes to meet us, to embrace us and to celebrate with us, to show his love for us. God became a human being at Christmas so that we might become divine, through our baptism and our participation at the altar, in the feast of the Lamb.

The Eucharist is the sacrament of unity, uniting heaven and earth through the sacrifice of Calvary, allowing all humanity to share the body and blood of Our Saviour Jesus Christ, feeding on him so that we may become what he is; enabling us to share eternity with him, and to live lives of faith and hope, and love. So then, let us join the Wedding Banquet of the Lamb and enter into the mystery of God’s self-giving love, so that we may believe and give glory to God the Father, God the Son, and God the Holy Spirit, to whom be ascribed as is most right and just, all might, majesty, glory dominion and power, now, and forever. 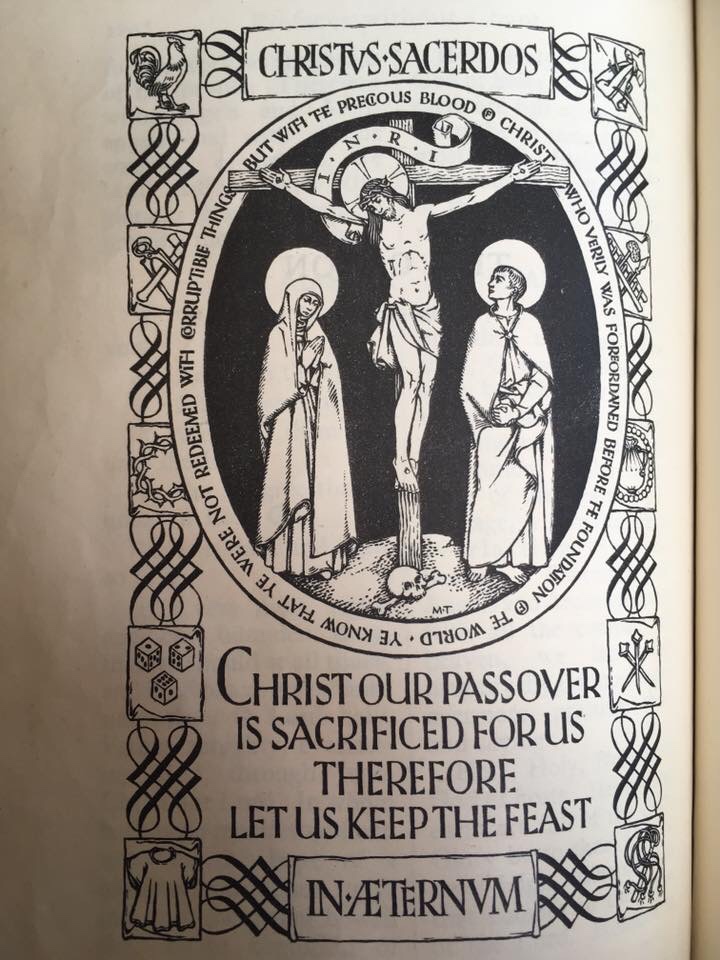